I saw this at the Cannes film festival where it premiered on the opening night. Was it a deadly opener or doa?

“Yes, there are George Romero references in the film,“ said director Jim Jarmusch at the press conference for his Cannes opening night film The Dead Don’t Die. “ Romero films made a big impression on me in learning about the horror genre which I don’t have a particular expertise in. He changed the idea of zombies and monsters. In the early monster films like Godzilla or King Kong, the monsters were always from the outside coming to wreak havoc on a community but in Romero films they are from within the society they terrorise. He makes them both victims and monsters.”

The influence is there to see on screen. The film opens with Bill Murray and Adam Driver as police officers driving past the local cemetery of Centerville (a real nice place to live, according to its signpost), a small, one diner, one motel town where everyone knows everyone. They’re going to see local weirdo ‘hermit Bob’ (Tom Waits) and his abundant straggly beard about the theft of some chickens from farmer Miller’s place.

Murray, as laconic chief Cliff Robertson, knows Bob from school days. Unlike rookie Ronnie (Driver) he doesn’t take it personally when they don’t get much co-operation from Bob who responds to their enquiries by trying to shoot them. Cliff doesn’t believe hermit Bob is behind the thefts which are part of some unusual goings on in the sleepy town. Apart from missing chickens these goings-on include malfunctioning watches and radios, continuing daylight well into what should be night time, Officer Ronnie’s oft declared sense of foreboding that all will not end well and news reports of the earth possibly having been knocked off its axis due to ‘polar fracking’. The recent arrival into town of strange new, samurai sword wielding undertaker Tilda Swinton doesn’t help calm the feeling of impending doom.

The tone of the film throughout is knowing and tongue in cheek with sly references to other work the cast members have done. Check out Adam Driver’s keyring for example. The cast itself is large but also largely underused. The perennially brilliant Steve Buscemi as the looked-down-upon farmer Miller sports a “Keep America White Again” baseball cap – an obvious dig at Trump supporters and a disregard for millions of potential movie goers who might not take kindly to being sneered at in this way. But then, as a man at my screening commented, the film is pretty heavy handed.

Selena Gomez too appears as a ‘hipster from Cleveland’ and disappears way too soon. A now visibly old Danny Glover too gets short shrift as an unlikely zombie fighter alongside Bobby Wiggins (Caleb Landry Jones) who sells ‘gas and stuff’ including zombie memorabilia. 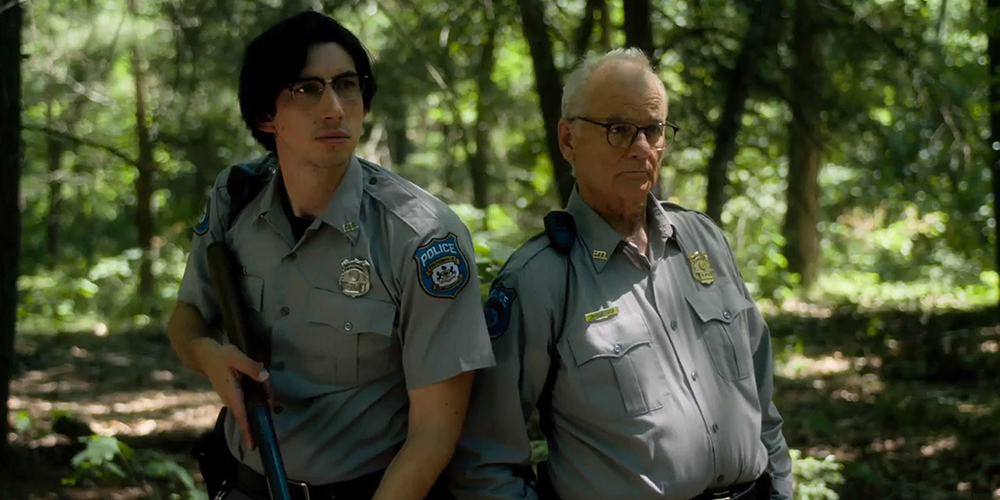 Iggy Pop as a coffee loving zombie, however, is pretty inspired, not least because it’s hard to tell if he’s actually a zombie or has just wandered in from one of his concerts.

The film’s title does what it says on the tin and is courtesy of a country ballad by Sturgill Simpson. Jarmusch  doesn’t disappoint on the corpse arms reaching out of the grave scenes. There’s plenty of gore on offer and a good few laughs and in-joke smiles to be enjoyed. Chloë Sevigny is a stand out as an emotionally vulnerable cop.

Overall, however, enjoyable as it is, The Dead Don’t Die was a lightweight choice for opening night at Cannes and may be too indebted to Shaun of the Dead   to be a big hit at the box office. However the fun the cast seem to have had making the film comes across on  screen and the clear affection and respect they have for each other and their director was evident at the press conference. The last word from that must go to the inimitable Bill Murray with this exchange.

Moderator: What scares you.

Moderator: But there aren’t any zombies on La Croisette

Michael Fassbender as Pádraic Súilleabháin in The Banshees of Inisherin

Paul Giamatti as Charlie in The Whale

Recast the Best Actor nominees with stars old or new:

___ as Elvis Presley in Elvis
___ as Pádraic Súilleabháin in The Banshees of Inisherin
___ as Charlie in The Whale
___ as Calum Paterson in Aftersun
___ as Mr. Williams in Living

Greek philosopher Aristotle once said, “Give me a child until he is 7 and I will show you the man.”

Looking forward to seeing this new initiative flourish and hopefully change lives for the better in the coming years.

The Prince and Princess of Wales @KensingtonRoyal

Our earliest years shape the rest of our lives. From pregnancy to the age of five, the world around us, the people we meet, and the experiences we have are all #ShapingUs