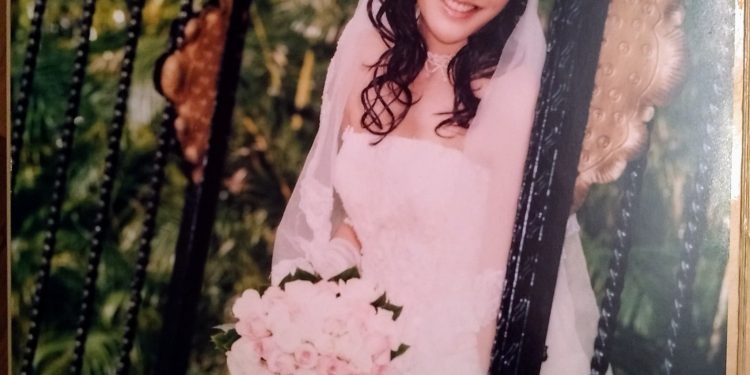 Recently, I was so exhausted I had a wee nap when the kids went to bed. Minutes later I was rudely awoken by husband to remind me I hadn’t yet eaten dinner and maybe I should feed myself before I die. Good point. So, after wolfing down some food, still bleary eyed, I grabbed my phone to check out what was ‘goin’ dang’, as my clients say.

And it made me proper lol. It took me back in time to when I had my wedding pics taken about a year before I got married. To be honest, I thought it was the done thing, you know, having pics before your actual wedding day. Turns out it’s just a Chinese thing. The article had such an impact on me that I actually went to find said pics.

Exhibit 1. Boxes with layers of dust. (Not everything in my house looks like that, in case you’re worried)

Rewind back some 12/13 years in Hong Kong with fiancé. We chose and paid for a ‘package’ which included a number of different wedding dresses, various prints (framed and unframed), albums and negatives (yep, that long ago).

Before the appointment I looked at my nails and thought maybe I should get them done. My first manicure. Who bloody knew there was so much to it? I managed to ruin them within 5 minutes of getting them done by using chopsticks during sushi dinner. Cue back to nail shop where they sighed and had apparently predicted I’d be so idiotic.

We went to the appointment. We’d chosen our outfits for the pics and I needed my make up done. For someone who never wears make up and can’t tell the difference between mascara and blusher, it was an utterly hilarious experience. I couldn’t tell the make up lady what colours I use. The other clients looked at me with undisguised disdain.

Then there was the magic tape. What?! Yup. Scotch magic tape. I’m like, wtaf are you going to do with that?! Apparently it was to make my tiny eyes bigger and to make my eyelids not-so-Chinese-like, folding out and not in. Phahahahahah!! Poor woman also struggled to get fake eyelashes on me because I kept recoiling and wincing. An hour later, I had long curly hair (not my own), big eyes, fake lashes and a face caked in make up.

TMI alert. My chest was, back then, at best flat, or at its worst, inverted. They managed to make me look like I had a boob job overnight. And my goodness, I couldn’t actually fit into any of the gowns I had chosen. In Chinese terms, I was fat because  comparatively speaking, the average Chinese woman was short and proper petite. They got me into a gown and couldn’t zip the bloody thing up. They put a panel of white silk in between and pinned it to the dress either side. ‘You won’t be able to see it on the pics’, they promised. That was the least of my concern. I could barely breathe and was worried about these pins either popping loose or stabbing me to death.

Fiancé looked dashing, of course, but his face was a picture. He was obviously wondering where I’d gone and who this Barber doll was.

We were introduced to our photographer- he was so good I actually remember his name after all these years. Karpil. He did a few shots, then showed us how awful we looked. Over the next few hours we walked round to different locations with Karpil’s assistant who adjusted the hair and dress that weren’t mine, manipulated my limbs into different poses and forced fiancé to pretend to look happy. All the while, Karpil snapped away. During this time, we also fitted in quick costume changes, change of hairstyle and short breaks to give those aching face muscles a break. It took effing hours. It was baking hot, the humidity was stifling and I swear I was melting, or at least, the make up was. I was exhausted and starving afterwards. The only saving grace was that I was able to wear my skanky trainers and not some ridiculous heels.

We were called in later to view the pics and to choose which ones we wanted. I could see Hong Kong dollar signs all over the saleswoman’s face as she tried to sell me pictures over and above the package we’d paid for. She was quickly disappointed. Sorry love, the family Bar doesn’t pay that well and the criminal Bar doesn’t pay at all.

Just as well. Other than the big print on the bedroom wall, and a couple of random smaller framed prints gathering dust around the house, I’d not looked at either of the two albums or the loose prints since goodness knows when.

Wedding photography is big business in Hong Kong/ China/ Taiwan. People (obvs not me) are prepared to fork out thousands for the experience and to have pics of themselves and their other halves with [insert random scenery not consisting of high rise buildings] in the background.

Would I do it again, knowing what I know? Yes, absolutely. But I would make sure I stuffed myself silly before the session and not to give two hoots about my nails because it didn’t matter what the hell you looked like going in, their jobs were to make you look like supermodels in the resulting pictures.

I guess you now wanna see some photos? Well, all right then, seeing as you got to the end of this article. Here you go. Don’t laugh. These were 12/13 years ago. 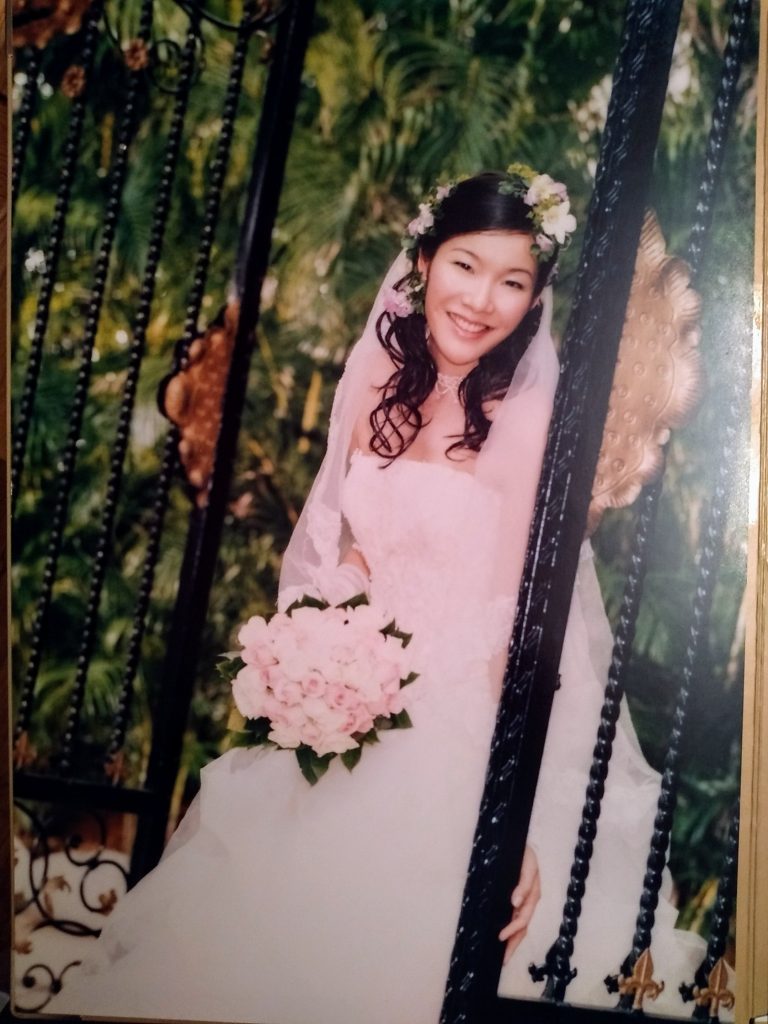 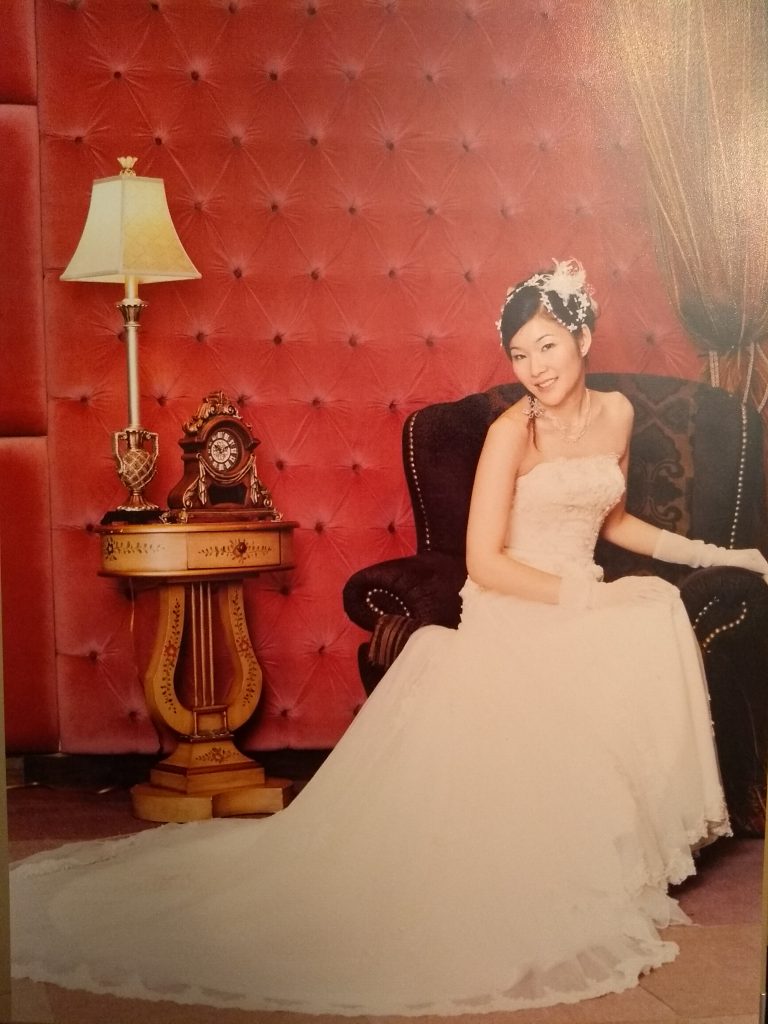 Hubby is squiggled out below at Rachel’s request. He’s not ‘cancelled’!! 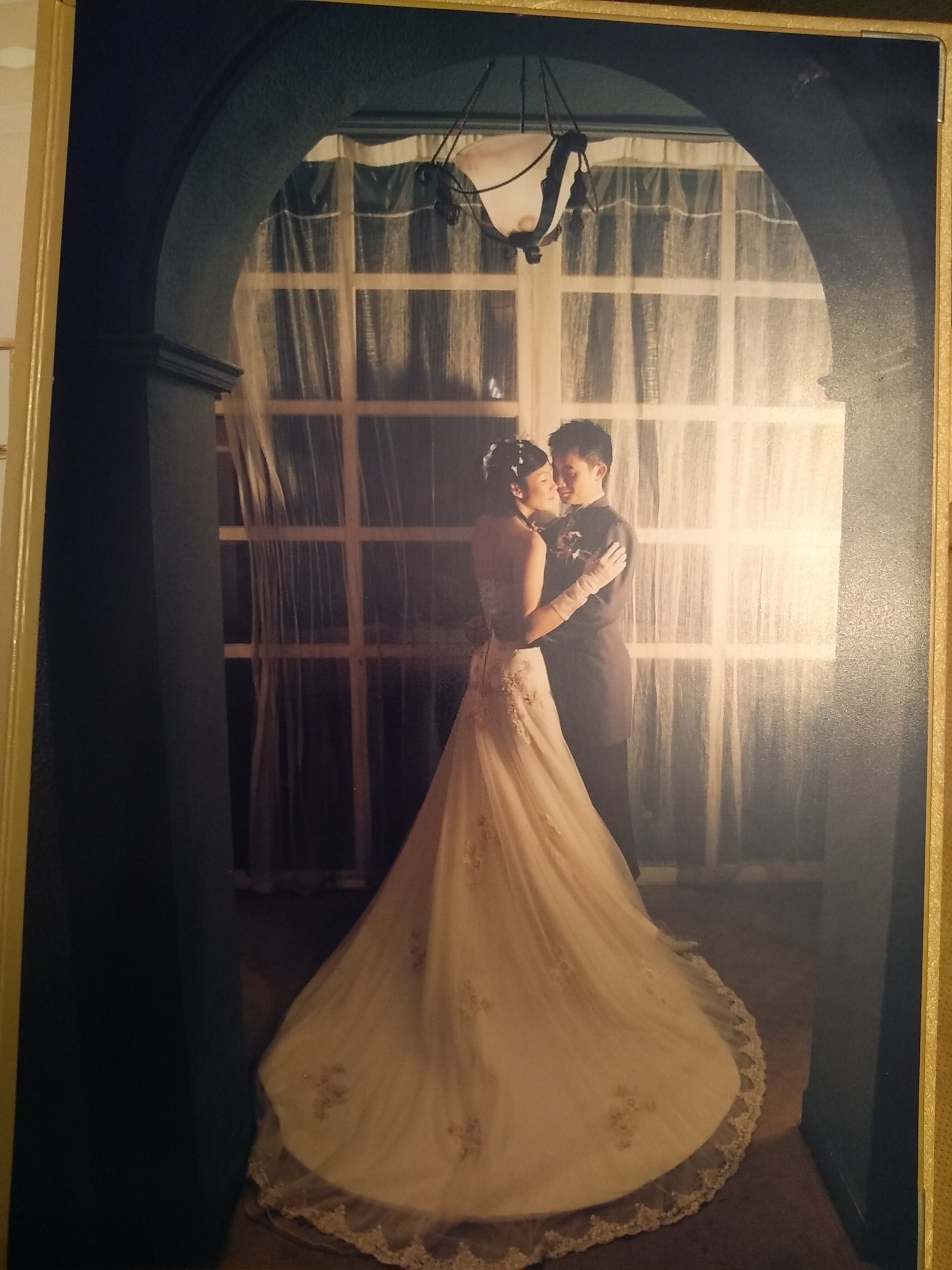 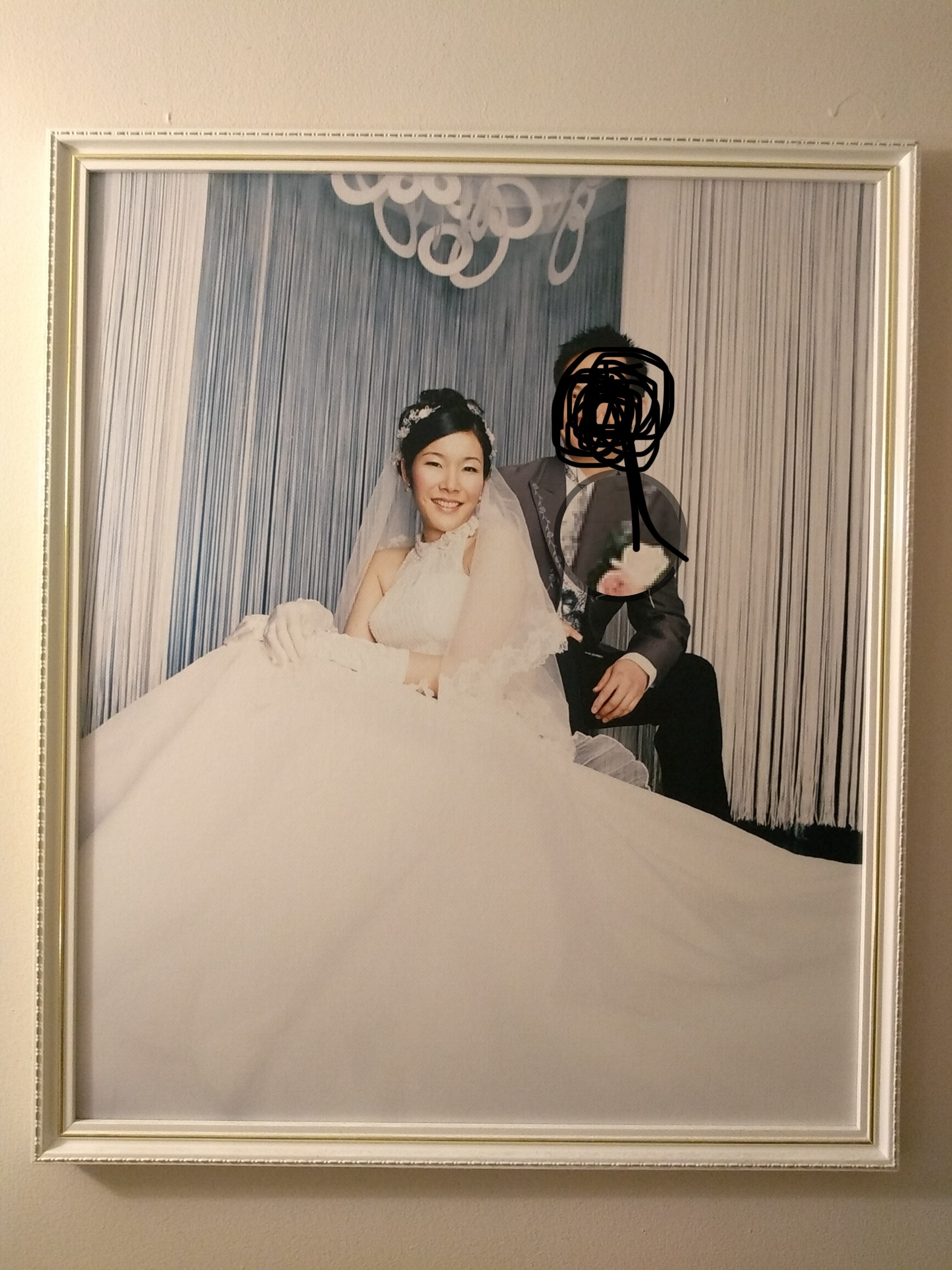 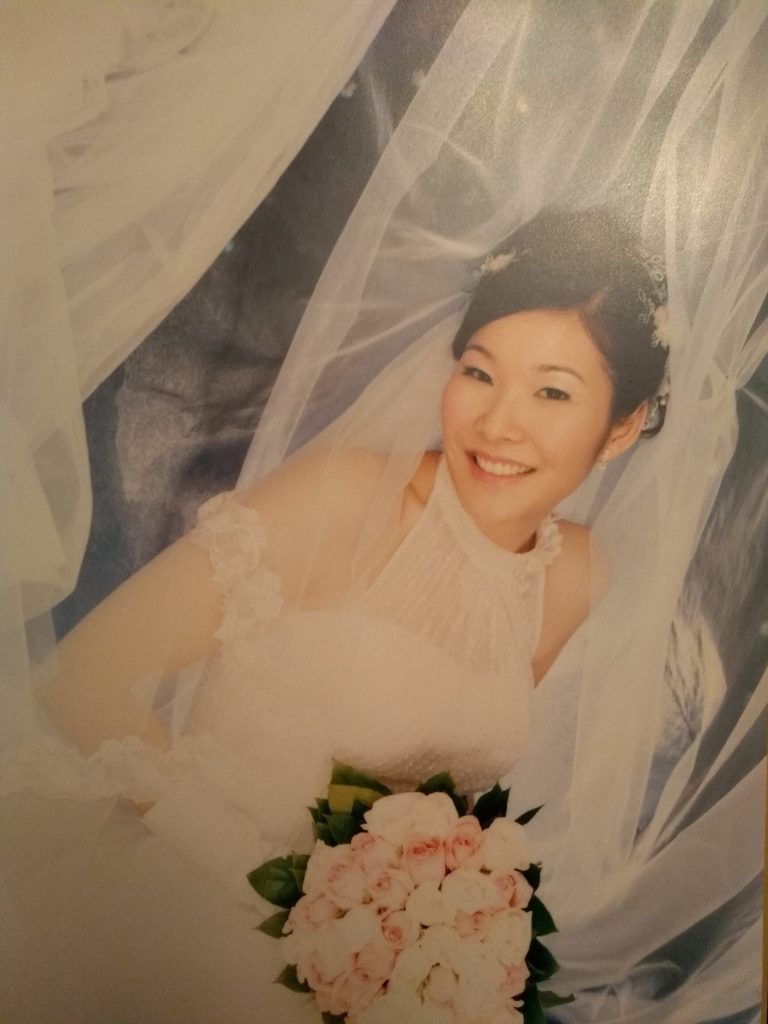