Unbroken is a beautifully and lovingly crafted film chronicling the extraordinary life of Louis Zamperini. A life both so awful and incredible that some have described it as needing 3 films in 1 to encompass it; Chariots of Fire to cover his early life as an Olympic athlete, Life of pi to show the 47 days he spent adrift on a raft in the ocean after his ww2 plane crashed and Bridge on the River Kwai to depict the two years of torture he suffered in a Japanese prisoner of war camp.

Each part of his life is handled with smooth assurance by director Angelina Jolie taking on this tough screenplay, written in part by the Coen brothers, as her second directorial feature.

Jolie befriended the real Zamperini and came to see him as the wise mentor and father/ grandfather figure she felt she had been missing in her life. The love and respect she says she developed for him shines through in her film, most notably in the smaller, intimate scenes of family life that are emotionally stirring and clearly heartfelt. She similarly tackles the epic scenes of warfare and brutality with aplomb aided by ace cinematographer Roger Deakins. 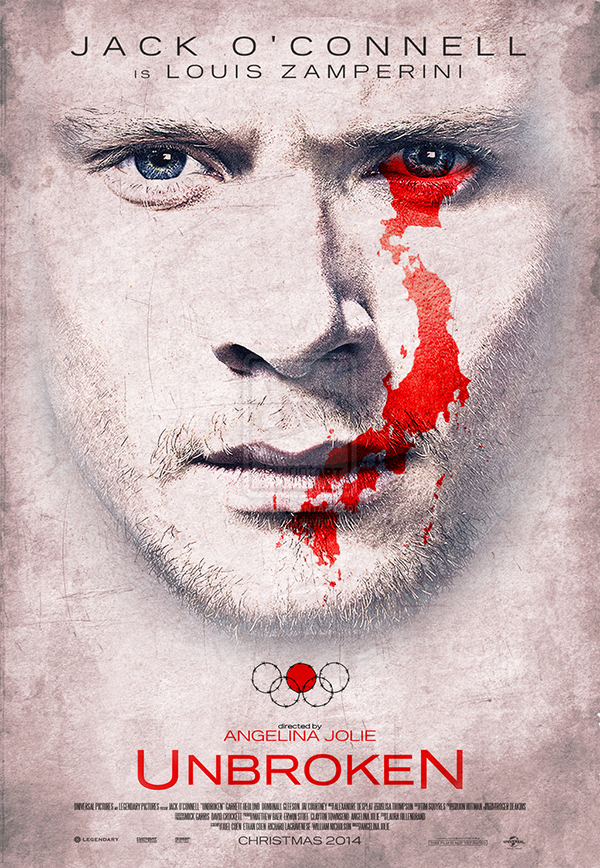 However none of it could have worked without a great central performance from the screen Zamperini. Enter Young British actor Jack O’Connell delivering the third of his excellent performances of 2014. His American accent is impeccable and his screen presence is a charismatic, compelling one. He is ably assisted by the supporting cast, notably Japanese pop star Miyavi in his impressive and chilling acting debut as the Prison guard intent on breaking Zamperini.

Unbroken has broken out big time at the US box-office. It recorded one of the biggest Christmas Day openings ever as audiences flocked to see the story of forgiveness, redemption and faith. The film is on target to make well over €100 million in the domestic market. Not bad at all when you consider that a Hollywood that churns out unimaginative sequel after sequel let this true story of inspiration and courage sit on the shelf for over 50 years.

It took Jolie’s fierce and formidable determination to finally bring Zamperini to the big screen and the discerning public is rewarding her by ignoring the unduly harsh critics reviews to go see her hero’s remarkable story.