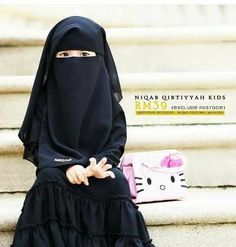 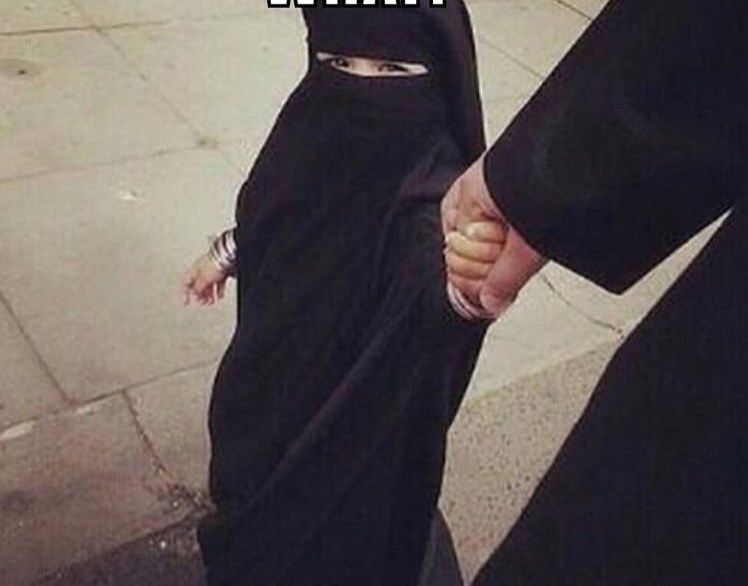 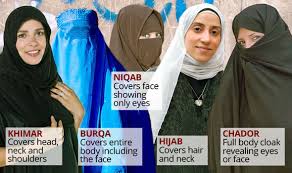 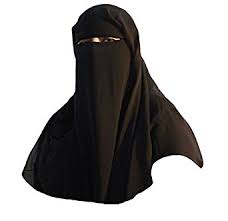 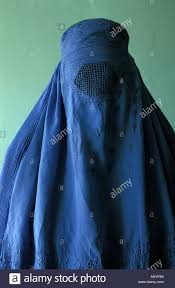 The stats show that this article is being widely read. It’s not surprising. The burka is being discussed by all and sundry. Interestingly it is being most vociferously defended by non Muslims and self proclaimed ‘feminists’ under the guise of supporting a woman’s right to choose what to wear and fighting ‘racism’. Yet it is not the dress of any race and Islam does not require a woman to wear it. As for feminism and choice, read on.

In the millions of words being written no one has answered the question I pose at the end of the article: If the burkha, niqab, hijab et al are so culturally important, such symbols of piety, so empowering, so cool, why don’t men wear them?

As for ‘choice’, our choices in life come from our beliefs. What belief, therefore, is fuelling the choices of those women who say they choose to wear it?

If the reason is that it makes a woman more ‘virtuous’ then surely the implication is that those women who don’t wear it are not virtuous. What is it, then, about a woman’s body which requires covering up in a way that a man’s body doesn’t? Is it more ‘sinful’ and tempting than the male body? What exactly is the belief ?And why shouldn’t others be able to challenge that belief whatever it is?

If it’s a political ideology behind the need to cover up, what is the ideology? And why shouldn’t others be able to challenge it?

There are many aspects to this debate, below I focus mainly on the message the burka and its cohorts gives young girls.

Barrister 1: I’m really sorry to have to do this but my clients want me to ask you if you are Muslim. And if so, why you aren’t dressed like a good Muslim.’

Barrister 2: How does a ‘good’ Muslim dress?

Both barristers look over to the two good Muslims waiting for the answer to their questions. They are in court, in care proceedings, about to have an order made for their baby to be placed for Adoption but this is the issue bothering them.

He is young, clean shaven, Middle-Eastern, in tight jeans and chest hugging T-shirt. He clearly works out. She is white, English, covered from head to toe in the garb her new husband has ‘asked’ her to wear now that she has converted to Islam.

No prizes for guessing that barrister 2 was me. And call me old fashioned but, yes, I do think any God might just find torturing children marginally more offensive than the hem length of a skirt or an exposed female hand.

Perhaps bulging muscle man in this case prescribed the dress code for his wife because he thought it was a romantic relic from his home country and it alleviated his homesickness. Except that his asylum application said that conditions in his homeland were ‘intolerable’. Especially for women. They could be flogged or imprisoned for not being covered from head to toe. Yet it was that which he chose to give his wife as her introduction to his heritage. Perhaps he believed that’s how women should dress in order to avoid tempting other men.

Perhaps it was to establish ownership of her.

Perhaps it was all he knew, having seen his mother and other female relatives wear it all his life.

Perhaps he had never given the question of why a woman should have to dress like that any thought because he was more bothered about women who dared not dress like that.

His wife said she had chosen to dress as she did and her English family had to respect her choice.

She had also chosen to abuse her children alongside her husband and further chosen to stay with him despite his violence against her.

I’m not sure how much respect we were expected to show her for those choices.

Choosing to do something doesn’t alone automatically make something good. People make choices because of what they believe. It is not the piece of fabric or the head covering per se that is the issue. It is the mindset that the item comes from.

Until the early 20th century women in China chose to bind the feet of their daughters to make them more attractive for marriage even though they knew the practice could cause life long disabilities. Today some women choose to put their daughters through female genital mutilation because of their beliefs. Are all these practices on a par? Not physically necessarily but they ALL come from beliefs about women, their sexuality and their potential appeal to men.

It made me think, for these young boys and their baby sister on the tube what will be their point of reference about men and women.

Which of their parents is going to teach them that their sister can grow up to be and do whatever she wants?

Which of their parents will be in a position to teach her that she has the same rights as her brothers?

When she grows up to make her ‘choice’ what early beliefs will shape her making that choice?

What early images will be floating in her subconscious about the role of men and women in public?

That women should be invisible behind veils and scarves once they step outside their homes?

That only men can experience a fresh breeze or sunshine or rain on their faces or the wind in their hair?

A few summers ago during a July heat-wave I was shopping in Southall, a London area heavily populated by people of South Asian origin. I saw a similar scene; a family with a man in shorts and T shirt, his wife clad head to toe in a black polyester complete with thick socks and gloves. The couple had a little girl with them, aged around 7. She too was dressed like her mother.

A group of middle aged Asian men who were sitting on a bench nearby looked at the girl and shook their heads sadly. One muttered something to his friends, they frowned and nodded. These men, due to their ages, would have had a point of reference, namely that the way Muslim women dressed in the UK changed dramatically around 9/11 giving lie to the claim that particular ways of dressing are religious requirements. Prior to this South Asians in Britain wore their respective national dress or western clothes. Now Pakistanis and Bangladeshis have largely adopted Saudi Arabian desert wear from the 7th century, a country they don’t speak the language of, have no connection to and would not live in if you paid them. Sartorially speaking they have become one amorphous mass of Muslim, the visual representation of a well funded political radicalisation movement.

Mostly though, people in Southall walked by not daring to even look. Just a glance might have been, you know, ‘racist’ or ‘Islamophobic.’

No one took a photograph of the woman or the girl. No newspaper put them on their cover. No hashtag was created for them on social media asking why they should have to dress like this in the sweltering heat. Or at all.

Ask anyone and they mostly shrug. Religion. Culture. Religious culture. Cultural religion. Whatever. No-one wants to offend. People can choose what to wear. We might not like it but it’s what they choose…….it’s just fabric.

Caitlin Moran says something about it in her best selling book, How to be a girl. It’s only a few lines but they’re interesting. She says unless a woman would choose to dress a certain way in the privacy of her own home when there’s no-one else around, maybe it’s not a real choice.

Maybe some women would choose not to experience the feel of a fresh breeze on their skin, or the rain or the sun’s rays even if they were alone on a deserted beach. Maybe some would choose, even then, to see the world through the criss cross of a mesh across their eyes.

But, I suspect not many.

If you think that 7 year old girl dresses like that, sees her parents dressed like they are but is somehow being brought up to believe she can be and do anything she wants when she grows up, wake up and smell the unspoken indoctrination as well as the blatant type. And what’s more acknowledge the true racism in this belief – that little white girls needs strong, powerful, equal role models in films they might see a few times a year but little Muslim girls can rise up beyond what they see every day in their own lives.

There is much more to say on this subject but for now I’ll leave you with another legal story. In 2006 a Bangladeshi girl born in Britain fought to wear Saudi Arabian dress to her English school. How multicultural. The story was all over the news. Cherie Blair was involved. There were credible claims of extremist groups being behind it all and this being a bid for Wahaabi power in the UK. It was the first major battle of many in which non Muslim Brits would fight among themselves about clothing worn by some Muslim women. It was the first time some white, non Muslim would explode with more passion in support of these women covering up their female bodies than they would ever express about the bodies of little girls blown apart by nail bombs at a pop concert for the sin of being female and enjoying themselves or the bodies of little girls raped hundreds of times by men who think they are white trash.

I was invited on BBC Radio 4’s Woman’s Hour to comment on the school girl’s victory in the Court of Appeal.

I read the judgment of the CA before I went on the show. My attention was drawn to one line. The schoolgirl claimed that ‘Better Muslims wear the jilbab.’

No matter what else you’ve done, you’re a ‘good’ Muslim woman if you cover up.

The burkha and its cohorts are increasingly being romanticised by the political left in the West. Garments that are seen as oppressive, misogynistic symbols of male ownership in countries where women are flogged, beaten, imprisoned and even killed for daring to take them off are being increasingly celebrated in the West by those who claim to be in favour of women’s rights. The symbol for the Womens March movement in the USA is a Stars and Stripes hijab. When Iranian women remove their hijabs in public displays of defiance and are arrested for their ‘immodesty’ there is total silence from western ‘feminists’.

Not one of these people, not one, ever asks, if the burkha, niqab, hijab et al are so culturally important, such symbols of piety, so empowering, so cool, why don’t men wear them? 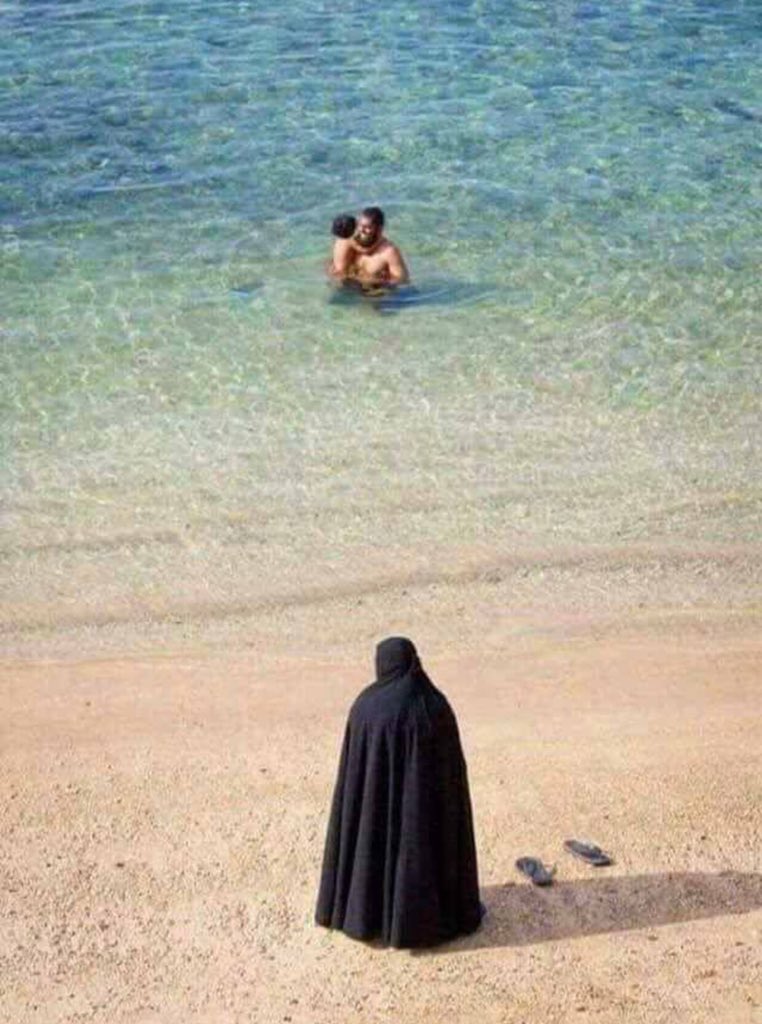