Friday Film : The Lost City of Z by Sara Hemrajani 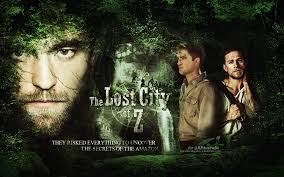 THE LOST CITY OF Z REVIEW

The thrill of discovery, the obsession with adventure and the dangers lurking in the wilderness are all showcased in celluloid glory in The Lost City of Z. An adaptation of the 2010 best-seller by David Grann, this true story follows acclaimed British explorer, Percy Fawcett (played by Charlie Hunnam), as he leads a team into the depths of the Amazon Jungle in the early 1900s.

An army man by profession, Fawcett was asked by the Royal Geographical Society to launch an expedition to South America to resolve a border issue in ‘savage’ territory. Spurred by his curiosity and a desire to improve his social standing – though an accomplished officer, Fawcett’s humble background was a talking point – he left behind his young wife and child to complete the mission.

During the trip, Fawcett came to hear about an ancient abandoned city (the eponymous ‘Z’) and became almost fanatical about finding it. Despite the risks and difficult terrain, Fawcett made a second journey to the Amazon shortly after his return to Britain. However, he remained unsuccessful in uncovering this mythical place.

The breakout of the First World War in 1914 thwarted Fawcett’s plans to go back and then his subsequent injuries made hopes of experiencing the wonders of ‘Z’ a distant dream. But a few years later, his eldest son persuaded him to seek fresh funding and media coverage for one final push.

Instead of pursuing big, brash action moments, The Lost City of Z is refreshingly old-fashioned in its approach, right down to the use of 35mm film. Director James Gray’s style captures the beauty and brutality of the Amazon as well as Fawcett’s thirst for the unknown. There’s a quietness to the movie which heightens the gorgeous cinematography and production design.

Amid the deluge of spring and summer franchise releases blockbuster remakes, The Lost City of Z is certainly a welcome palate cleanser.

The Lost City of Z opens in UK cinemas on Friday, March 24.