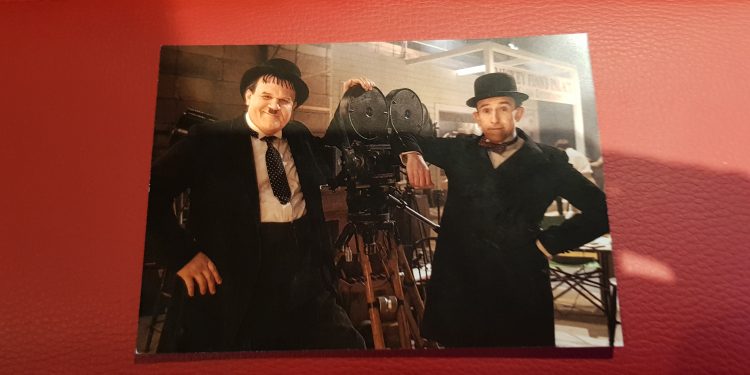 I’m not sure it’s even possible to be friends with anyone who doesn’t love Laurel and Hardy. Their innocent brand of entertainment is from a bygone era but the legacy of the greatest comedy duo is for all time. Generations since have grown up on it. Many adults now will associate Saturday morning childhoods with a Laurel and Hardy double-bill on television and it is a loss for this generation that there isn’t such magic for them now.

Thank goodness, then, that Stan and Ollie which is on general release now captures some of that magic. I saw it twice in one day at LFF, including at the premiere and loved it each time which is a good measure of a fine film.

It’s based on a book about the duo’s tour of England towards the end of their career when they had been cast aside by Hollywood and the public largely assumed they were retired or dead. The theatre tour beginning in small northern towns is intended to help resurrect their movie career as they heartbreakingly put their trust in management and executives who privately believe they are yesterday’s act.
Essentially though, this is a film about friendship. A decades long friendship between two of the most famous entertainers ever and the cutthroat business they work in but a friend between two different personalities nonetheless. Director Jon S Baird is as much interested in the buried resentments, rivalries, mutual respect and abiding love that such a partnership brings as the comedic genius that springs from two people in creative synchronicity.

John C Reilly and Steve Coogan take on the colossal challenge of capturing the magic of the double act and they are both sublime. In an awards season when other actors are being recognised for playing real people, it’s astonishing that these two are flying under the radar with only one being acknowledged by an awards body at any time.

At the premiere the director said that both actors had been the first choices to play the roles. John C Reilly, when first approached, had said it was ‘a daunting prospect to play Oliver Hardy but it was even more scary to think of someone else playing him.’
Both actors were playing their heroes and it shows in the meticulously researched and loving portrayals they offer on screen. Coogan is a revelation as an actor just as he was in Philomena.

In doing the famous dance from Way out West, Reilly and Coogan not only had to learn the dance properly but also the mistakes Laurel and Hardy made learning it. Joining the two actors in their remarkable performances and indeed matching them for brilliant comic timing are Nina Arianda and Shirley Henderson as their wives. Rufus Jones is equally wonderful as their oily promoter Bernard Delfont.
At the premiere Reilly answered my question of why Laurel and Hardy are timeless ‘They figured out the secrets of comedy which is timing, connection and a humanist approach. They’re the greatest clowns that ever lived.’