My Time : a short film about menstruation 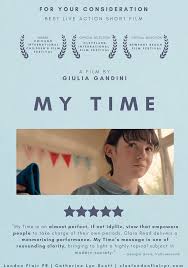 One of the good things about awards season is getting to see films that you would otherwise miss. A short film which is a ‘for your consideration’ contender is My time, a film about menstruation. Specifically the first period of a schoolgirl and the discomfort and fear it brings to her. It stars Clara  Reid who, as the hapless girl, begins her period shortly before she is about to face the class to talk about a hero she admires. Reid is the only professional actress in the film and the compelling centre of it despite little dialogue and being largely pinned to her chair. WonderWoman plays a part in the story and yes, we do see the stain on the skirt that the girl is initially so ashamed of.

The film was inspired by something the director, Met film school alumni Giulia Gandini witnessed as a child. Her friend had her first period in public and the blood seeped through her dress. The friend was ashamed such is the taboo nature of this female bodily function.
In a Q&A after the film the director spoke of research that shows that 50% of girls are ashamed of having their period and will miss school rather than suffer the indignity of staining something with that shame. The director herself knows the feeling. She experienced that same shame herself, when she woke, one morning, beside her boyfriend, on a blood stained sheet.

She told us that the film has been screened in several countries and is being shown in schools. Overall, the response has been positive although as yet the film has not been screened in Italy or Spain. ‘ Girls, Women want to share their stories, their emotions after the screenings. It’s so inspiring. It’s about the idea of period positivity that groups are trying to promote. Films can shape culture.’