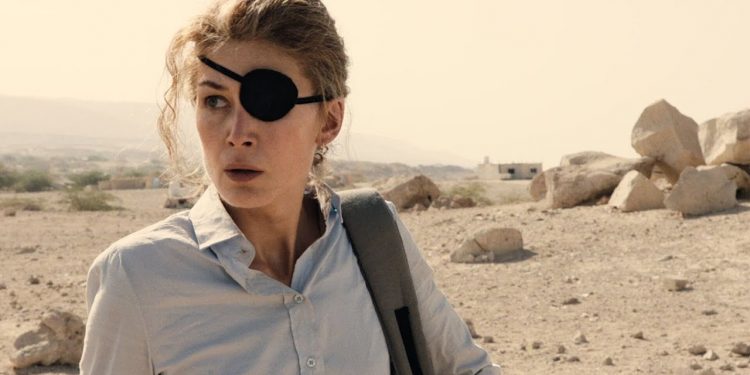 ‘ I see it so you don’t have to!’ Rosamund Pike, as war correspondent Marie Colvin, spits out at her Sunday Times editor Sean Ryan (Tom Hollander) towards the end of A Private War as they argue on the banks of the Thames which rolls serenely past. She means the atrocities of war which she is compelled to return to time and again to report on despite hating her own compulsion. She does it, she believes, to give a voice to the ordinary men, women and children who are fodder for the military and political ambitions of dictators and leaders themselves safe in their palaces, well, until the mob gets to them and takes selfies with their mutilated corpse as we see later in the film. 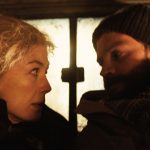 Marie Colvin was a much celebrated war reporter who was killed in Syria in 2012 along with her interpreter/guide. She achieved fame in her lifetime for her fearless, uncompromising journalism but also for the black eye patch she wore after losing an eye in Sri Lanka when reporting on the Tamil Tigers in 2001. Her death will still be fresh in the minds of those who follow current affairs as will her extraordinary persona.
It’s a testament then to the tremendous power of Rosamund Pike’s performance that minutes into the film she becomes Colvin. The deep gravelly voice, the Long Island accent, the no nonsense, blunt manner of speaking are not only completely captured but taken possession of by the very English rose Pike. 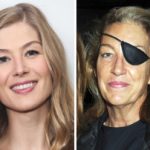 She embodies Colvin with a natural ease which exposes the private vulnerabilities of a woman who could have been simplistically portrayed as a one of those annoying ‘strong, uncompromising women’ that Hollywood seems to think raises the female profile but real women find unbearable. Pike is not afraid to make the chain smoking, heavy drinking, conflicted Colvin unlikeable at times. But it’s in the quiet, reflective moments of Colvin’s life when she is alone with her ravaged eye and light desire for the normal suburban life she rejected that Pike is at her most effective. This is a film about the psychological damage of seeing what the rest of us don’t have to as much as it is about the grotesque mess of war on the battlefield.
Colvin wants a child and considers it with the man (Greg Wise) she’s already divorced a couple of times despite having suffered two miscarriages. She may or may not be prone to seeking connection through other convenient liaisons. Her friend tells her she’s an alcoholic and she thinks about convincing a psychiatrist she’s sane so she can leave a rehab clinic she’s an inpatient in before she’s really up to it. She’s plagued by flashbacks and nightmares.

We learn all this about her but, like her, don’t have time to fully process any of it before she and we are whisked off to Iraq. There she meets a freelance photographer, Paul Conroy, (Jamie Dornan) and the two quickly form a professional partnership with Colvin very much in the driving seat as to where they go and what risks they take. In one case this involves her confidently flashing a gym membership card to get through a heavily armed checkpoint. The friendship which builds between the two is not explored enough and Dornan is not given enough to do but when the inevitable danger which is foreshadowed throughout the film befalls them it’s intense and a swallow hard moment. (Dornan, incidentally, is one of the ‘pretty boy’ actors who is taking an interesting career path, mixing leading roles with impressive turns in supporting roles. He’s a talented actor and seems to be taking solid and intelligent control of his way forward in a crowded market. It’s good to see)

Even though we know her death is coming , when it actually does, there’s a real sense of loss, largely due to Pike having brought Colvin to life so brilliantly beforehand.
I predict we’ll be seeing a lot of Rosamund Pike during awards season for this timely film produced by Charlize Theron about a very modern heroine.

Wednesday Woman : Chronicles of an aspiring ...