Lewes and ‘the Lewes Combined Court Centre’
A very brief history.
By Tim Bergin, family law barrister at 1Crown a Office Row, Brighton
Set in the heart of the beautiful Sussex countryside is the ancient Saxon town of Lewes. Founded in the 6th Century, the towntogether with a swathe of land along the River Ouse was given to William de Warenne, 1st Earl of Surrey by William the Conqueror as a reward for his actions in the Eleventh Century.
By 1148 the town was granted a charter by King Stephen.
It’s also the site of the Battle of Lewes between the forces of Henry III and Simon de Monfort in the Second Baron’s War in 1264, at the end of which de Montort’s forces were victorious.

Famous sons of Lewes include Tom Paine, the English/American political activist, philosopher, political theorist and revolutionary of the 18 century and the palaeontologist Gideon Mantell.
Lewes has hosted a court since Norman times. Initially, the ‘lords court’ was held every three weeks and was the court for the surrounding area of Sussex. Two rolls of this court, described as ‘curia castri de Lewes’ still exist.
The three weekly court presumably fell gradually into disuse. By 1833 it could be observed that there were no courts on record peculiar to the borough, while in 1880 it was specifically stated that the administration of justice was done exclusively by the magistrates of the county, at pretty sessions, held by them in Lewes weekly.
The delightful building which is now the Lewes Combined Court Centre and situated in the High Street was designed by the architect John Johnson and was completed in 1812 (three years before the end of the Napoleonic Wars). It was originally built as East Sussex County Hall at a cost of less than £15,000.

The court has hosted many well-known cases, including R v Mancini (The Brighton Trunk Murder), in which a rather unpleasant smell was found emanating from an unclaimed trunk at Brighton Railway station. When opened the dismembered torso of a woman was found. When other stations were alerted, a suitcase located at Kings Cross Station was found to contain the limbs of the poor deceased soul.
Also heard was the notorious case of John George Haigh, better known as the ‘acid bath murderer’. John Haigh was a serial killer from the 1940’s and reportedly murdered 6 people after which he disposed of the bodies by placing them in baths of concentrated sulphuric acid. Unfortunately for Mr Haigh, he misunderstood the meaning of ‘corpus delicti’ as being there could be no conviction for murder without a body. The jury found Mr Haigh guilty within minutes of retiring. Following his conviction, Mr Haigh reportedly asked one of the prison guards whether it was possible to have a trial-run of his hanging to ensure everything ran smoothly on the day. Mr Haigh was hanged on the 10 August 1949.

More recent high profile cases have included Roy Whiting (convicted of the murder of Sarah Payne, Graham Coutts (convicted of the murder of schoolteacher Jane Longhurst) and Andrew Wragg (manslaughter of a seriously ill child of the family).
In January 1995, a two year, £4 million refurbishment of the court was completed and the Lord Chancellor formally re-opened the Grade II listed building. The work involved improvements to the courtroom and offices, as well as the renovation of the buildings historic features.
In 2013, Her Honour Judge Shani Burns took over the reins from His Honour Judge Richard Brown DL, who had sat in Lewes since the early 1990’s.
Commenting once on the presence of the Meridian Line running through the heart of Lewes, Judge Brown is reported to have said that the line ran straight through his chair in court three. This, he explained, was why he never knew quite which side of the line he was on!
In April 2011 the New Sussex Opera Group were permitted to perform the Gilbert and Sullivan opera ‘Trial by Jury’ in Court number one. The organiser, and one of the star performers, was former Judge Michael Kennedy QC. 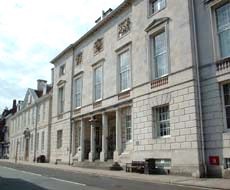