Friday Film: The True History of the Kelly Gang by Rehna 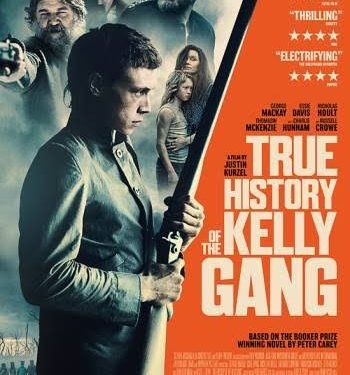 The True History Of The Kelly Gang

Australia remains enthralled by its outlaw anti-hero, Ned Kelly.  The legendary, even iconic, bushranger has been the subject of previous films, including the very first Australian feature ever made; The story of the Kelly gang. Heath Ledger played the lead in a 2003 film and in one of the most bizarre castings ever, Mick Jagger tried his hand at the role in a critically panned attempt in 1970.

Now, Justin Kurzel brings the 19th century myth to the big screen with an impressive cast and equally impressive credentials of a script based on the Booker prize winning novel by Peter Carey. The True History of the Kelly Gang purports to be a less romanticised, grittier and altogether more brutal account of the story. The defiance of the English colonial oppressors by Kelly and his gang is what the story leads up to but a great portion of the film focuses on the man at different points in his life; in particular his upbringing in the rough and ready home provided by his ballsy mother Ellen (a fiery, mesmerising Essie Davis)  who, amidst the chaos, violence and injustice of their lives, instils in the watchful little boy a fierce sense of family loyalty and a ‘don’t complain, don’t explain’ approach to life.

The prospects for young Ned Kelly (an excellent Orlando Schwerdt) are as bleak as the scorched landscape in which he and his siblings are being brought up. At one point he is sent, by Ellen, to earn his keep and learn about life from Henry Power ( a gnarly, powerful Russell Crowe). The boy soon, painfully, discovers that he has been sold by his mother to the notorious criminal and his apprenticeship involves him being asked to kill the hated English sergeant (Charlie Hunnam) who has brought so much misery to his family, as part of some initiation process. Kelly can’t do it and returns to his mother’s home, angry at Power, his mother for selling him and at himself for perhaps not being man enough to ruthlessly kill. The idea of what it means to be a ‘real man’ is played with throughout the film, from the young Ned seeing his father cuckolded to when he grows up to become, hot actor of the season, George Mackay.

As a bare knuckle fighter, would be wordsmith who wants to tell his own story, leader of a guerilla gang, loyal son, man of the house, inexperienced lover, killer, emotionally wounded little boy, we see the many faces of Ned Kelly. There are moments of homoeroticism that flirt with the idea of some attraction or attractiveness to fellow gang members or the oily but sadistic English constable Nicholas Hoult who plays a cat and mouse game with him. The cross dressing, with gang members wearing women’s dresses to unnerve the enemy during attacks adds to the teasing sexual ambiguity that runs through the film. Mackay, who is half Australian, gives it his all. He is, in turns, vulnerable, vicious, tender and ruthless.

The film itself is raw, bloody and brutal with epic cinematography, at times riveting and always watchable. Justin Kurzel continues to be one of the best directors working today.

I attended the premiere of the film and Q&A which was attended by, among others, Mackay, Kurzel and Davis with a brief appearance, at the end by music legend Nick Cave. Here are some snippets from the discussion:

20 years since novel. Rereading of this great Aussie icon.

Justin Kurzel: It’s 20 years since the novel. I was petrified to make the film. The book questioned his mythology, this 24 year old bush ranger. But I was drawn to the idea of people’s history being stolen. I wanted to explore the question, Why did he have such a prolific impact on our psychology?

Plus Ned has an articulacy to offset the brutality which was interesting to me.

We shot it in the winter, in Kelly country. Parts of it were where the gang would have ridden through. The Australian landscape is an intimidating part of the story.

Even the soundtrack is influenced by Australia birds which are loud and screamy, not soothing.

It’s one of the most striking things in the book. Australian masculinity can be hard. But Australian men love donning a dress. Alpha men, particularly! Dresses, here, were worn like armour. It was a form of empowerment. It’s an Affectation but there is a commentary about masculinity too.

It’s told as a linear story because it made sense to do it that way. Young Ned. He almost had premonition of his destiny. Like a calling : so the structure of the story became:boy, man, iron clad monitor.

Essie Davis : Ellen was great to play. She’s so ferocious. A mercurial character. A woman’s life in that period was so brutal. One woman for every 100 men. She will do anything for her children. Her husband is depleted. Oppressed by lawmakers. So she protects her family. I love her. She’s a Survivor.