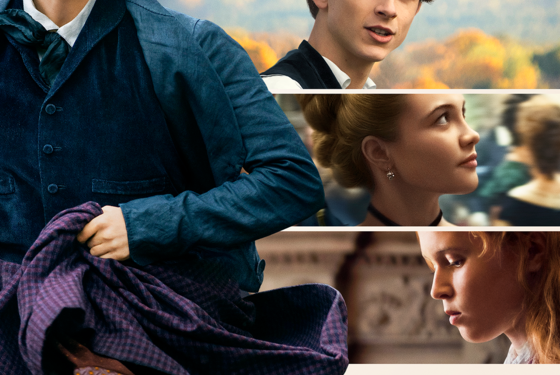 This is likely to be an unpopular review with many readers but here goes – I didn’t care much for Greta Gerwig’s version of Little Women. (It was even a minority view amongst the group of eight with whom I saw the film, so I know I’m out of synch with the prevailing opinion on the film).

I suppose I’m just an annoying purist when it comes to classical literature, especially books that I loved as a child (and still love and re-read as an adult). The images of the four sisters; Meg, Jo, Beth and Amy and their wealthy neighbour and love interest, Laurie, were formed in my head when I was a girl and it’s hard to shake them out. I know too that there have been several big screen and TV versions of the story and most people have their own particular favourite because it accords with the images in their heads. 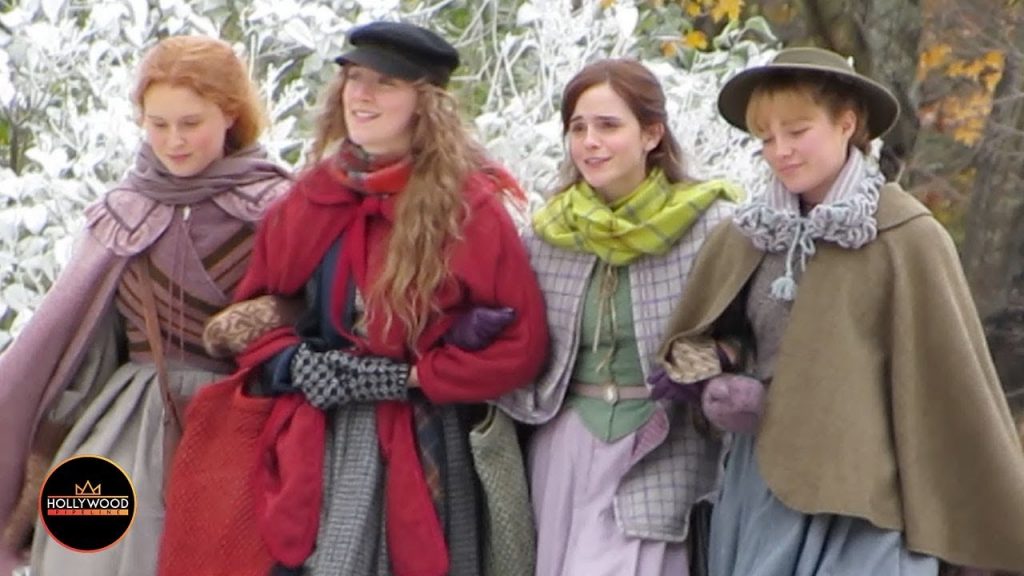 Gerwig is drawing rave reviews for her 2029 ‘modern’, ‘feminist’ take on the family saga of the March sisters and I have no problem with the enthusiasm. The film is lovingly and intelligently directed. It looks beautiful. The costumes are gorgeous, particularly those of Amy (the cape she puts on over her dress in the scene after she leaves Laurie in the painting studio to go for a carriage ride with a rich  admirer is particularly stunning). The cinematography is gorgeous and the score by Alexander Desplat is on point and never intrusive. Gerwig also does what no other adaptation has done before; she weaves a little of the thoughts and life of the author, Louisa M Alcott into the film and aligns her with the character of Jo who was essentially Alcott herself. That is a bold move and it works. She highlights the innocent charm, warmth and joy of family life and childhood by filming it in bright, honey hues, against the darker tones of adult life and struggle and that too captures the essence of Alcott’s writing. Timothy Chalamet as the rich ‘boy next door’, Laurie and Meryl Streep as the crotchety but insightful aunt March  are excellently realised by a rising talent and a legendary one.
All that is good.

So why didn’t I love the film? I wanted to. I really did. I enjoyed Gerwig’s Ladybird last year, I’m pleased she is the hot female director of the moment and I will have no problem if she breaks into the top five nominees for best director at the Oscars which otherwise is looking like an all male list.

The problem for me starts with the cast. Save for Laurie and aunt March the main characters are, in my opinion, miscast. The book is an American classic yet none of the four actresses are American. Emma Watson as Meg and Florence Pugh as Amy are British. Saoirse Ronan is Irish ( though born in New York)and Eliza Scanlen is Australian. This would not normally be fatal in itself, except here the accents are all over the place and it’s jarring in a number of scenes. Watson as the eldest sister looks younger than the other three, her accent is the weakest and she never quite convinces as the home living sister who longs to be a wife and mother. (This is where actors espousing political views in real life, can, spoil their believability as characters on film).
Scanlen as the sweet, delicate and doomed Beth, like every other actress who has played the role looks the most robustly healthy of the four sisters!
Ronan, an excellent actress, is overshadowed in her own film by Pugh whose role is expanded in this version to make her almost the lead character. The relationship between Jo and Laurie which is central to the plot in the book is reduced to one unlikely dancing scene early in the film and there is little sense of the chemistry and burgeoning love thereafter which has made generations of readers ship them as a couple. So, when it all goes wrong, there is no real feeling of great loss .
The focus, in this film, is very much on the evolving relationship between Laurie and Amy which instead of a plot twist ends up as an inevitability for the audience. 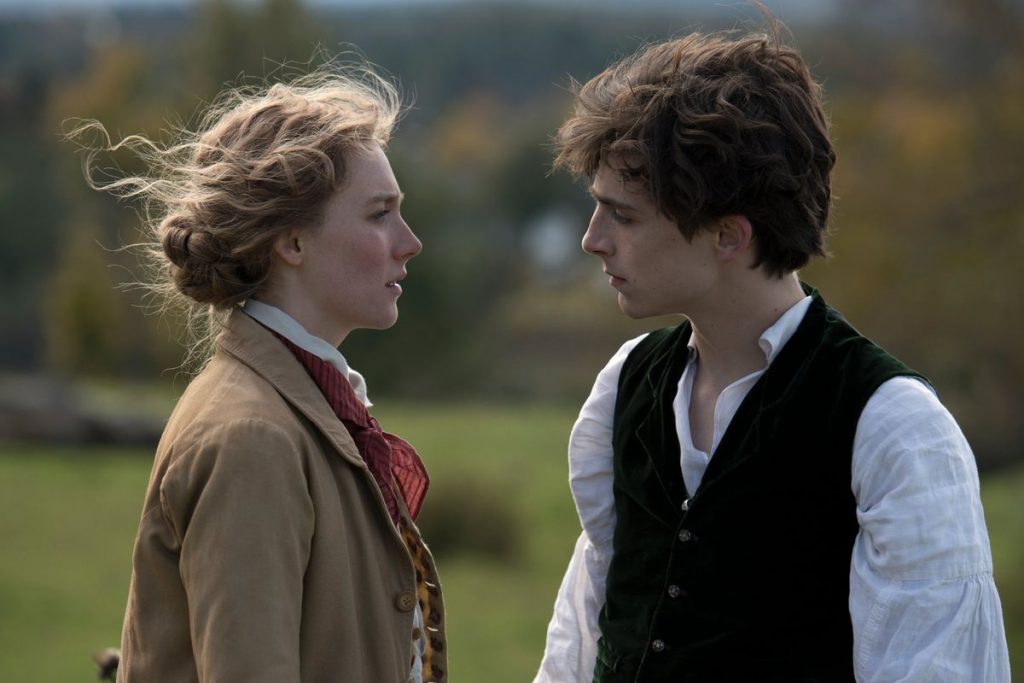 Florence Pugh is rightly being lauded for her performance as the youngest sister. She will, almost certainly, be nominated in the best supporting actress category at . all the big awards. She is very good in her role. I’m just not sure she was playing the Amy of the book. That Amy is a vain, envious, self absorbed, selfish, entitled, annoying brat and something of the villain of the piece. Here she is a bit snarky at times but otherwise is a wise, cultured and mature woman. 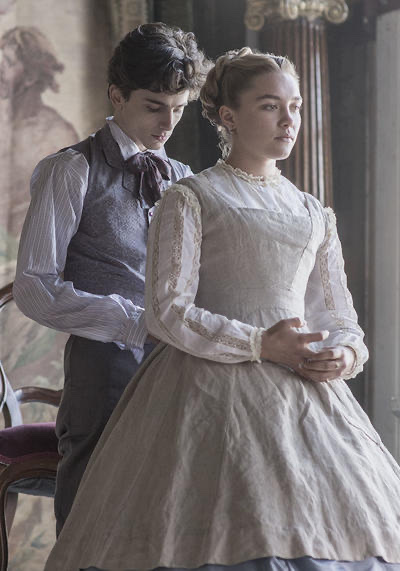 Laura Dern, again, a fine actress, is a too angular Marmee and the injection of Hollywood’s 2019 politics in one of her scenes stands out like a sore De Niro rant. Otherwise, thankfully, the political correctness is kept low key. Although much is made about the lack of opportunities for women in exposition, there is little shown of this in the story itself. The girls seem to lead pretty unconstrained lives. Nor is there evidence of the poverty that Meg often speaks of.
The most bold and arguably jarring aspect of Gerwig’s film is that she doesn’t tell a linear story. The film moves back and forth between adult life and childhood with little, at times, to differentiate between the two in terms of the characters’ appearances. Fans will know that part one, Little Women  and part two, Good Wives are amalgamated in the story but it’s likely to be confusing for those unfamiliar with the books. More importantly, by showing the second part of the girls’ lives, the film the story loses all sense of surprise (although I acknowledge that the book has been around for 151 years so spoilers aren’t exactly a key thing).

All that said, the final half-hour is wonderfully done  and made the film for me. Ronan finally shines, the film engages you emotionally and there is a sumptuous quality to each scene.
Despite my misgivings I wish Little Women well.